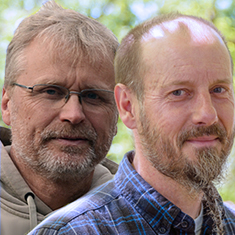 Svensk fågeltaxering, Swedish Bird Survey, has recently been named “Environmental Hero of the Year 2021” by WWF Sweden in the category Biodiversity. Much of the project data is available via SBDI.

Within this bird monitoring project, volunteers and ornithologists monitor changes of Swedish bird populations. For more than 50 years, the number of birds is counted, at different times of the year and at more than a thousand premises around Sweden. Since the sampling is made according to strict methods year after year, it is possible to follow how the number of birds changes over time.

“We are honored and very happy for this recognition of the hard work done by all involved”, says Martin Green at Lund University, one of three in the project management.  “We are especially happy on behalf of all our investigators, who year after year make such brilliant efforts in the field for the monitoring of our birds”. In recent years, between 700 and 800 volunteers have participated annually.

The project is run by researchers at Lund University, on assignment of the Swedish Environmental Protection Agency and in collaboration with all the county administrative boards. Much of the project data is available via SBDI. The data collected are used primarily to calculate changes in the number and distribution of birds, as part of national and regional environmental monitoring. But the information also forms the basis for three different environmental goal indicators in Sweden (forest, agricultural landscape and mountains) and is the core of both the Swedish red list work for birds and Sweden’s reporting to the EU Birds Directive. Data are also included in the European Commission’s official European bird indicator “Farmland Bird Index”.

“The fact that our environmental monitoring data is also used in both basic research and applied research, we see as a quality rating. A big compliment to Sören Svensson and Leif Nilsson who were so foresighted to start the systematic counting already in the 1960s”, says Åke Lindström. Swedish Bird Taxation data is now used in between 5 and 10 internationally published scientific papers per year.