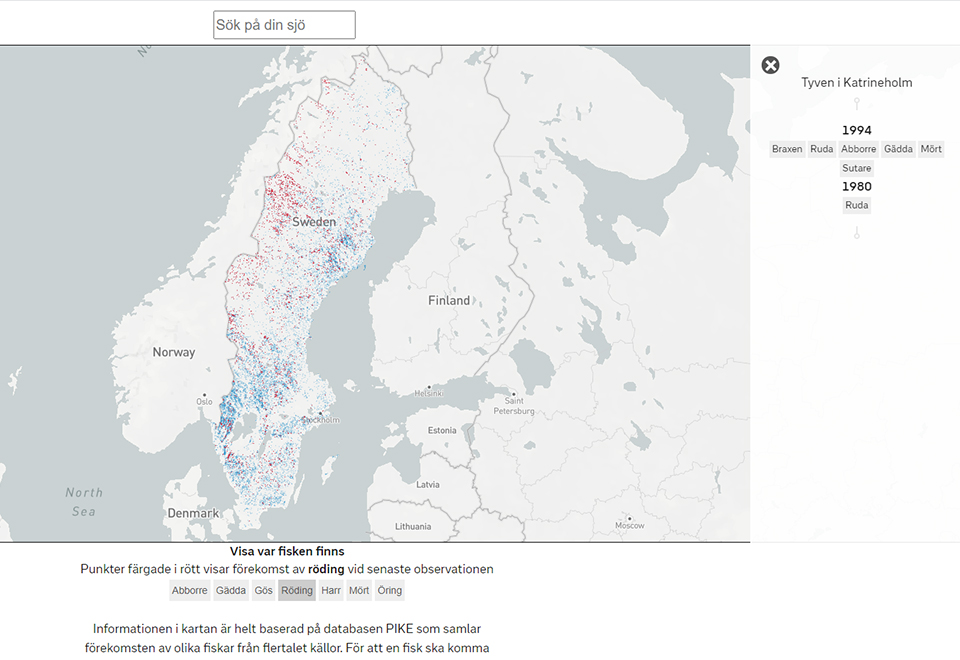 The Swedish public service television company (SVT) has made a clickable map of fish species in Swedish lakes. “What is (or was) in the lake where you live?” As part of the newsroom, SVT works with Data Journalism and Editorial Development, to show journalism in new, as they say in “cool ways”.
In this case, they use data on occurrences of various fish species in over 17,500 Swedish lakes – from Gustav Vasa’s time to today. The lakes are marked in a searchable and zoomable map. The information in the map is based entirely on the PIKE database, which collects the presence of various fish from many sources. The lakes in PIKE are also linked to SMHI’s water archive. The PIKE database of the occurrence of freshwater fish in Swedish lakes is compiled at Umeå University. The main sources in this database are:
Umeå University’s inventories
SLU Freshwater Laboratory inventories
County Administrative Board data 1970’s and onwards, test fishing.
Municipalities data 1970’s and onwards, test fishing.
Gustav Vasa’s fishing register 1550–1560. Probably the world’s first large-scale fish inventory.
The Swedish Board of Fisheries / The Danish Fisheries Agency. National inventories, 1890’s, 1920-1940, 1994. Surveys and interviews with local fisheries officials and fishermen.
The Rotenone register 50’s-60’s.

Many lakes in Sweden have the same name. Therefore, the lakes are linked to different large and small geographical divisions so that it is possible to search for the right lake. Among the published lakes are, for example, 55 “Storsjön” and 98 “Abbortjärnen”.